With the proper tools people have the power to influence the course of chronic disease. Our digital tools coach people through exercise protocols designed to improve Parkinson's disease symptoms and delay disease progression.

The goal of our analysis is to run statistical tests to quantify the behavioral improvement for subjects that have participated in the exercise program and circleTap™ finger tapping tests.

There are currently no pharmacological solutions that cure PD, and the primary treatment- levodopa- loses efficacy over time.1 There is growing evidence that exercise, and cycling in particular, may positively impact the symptoms and disease progression of Parkinson’s disease by stabilizing essential tremor and muscle weakness.2,3 However, the most effective exercise program for improving PD symptoms has not yet been established.

Beneufit’s approach features exercise protocols derived from the research of Dr. Jay Alberts of the Cleveland Clinic, which showed that a high cadence cycling protocol improved Unified Parkinson’s Disease Rating Scale (UPDRS) scores by 35%.4 The goal is to achieve a heart rate between 75% and 85% of maximum and cycling cadence of 90 RPM.

When following this protocol, users of our PD-specific application (pdFIT™) have exhibited statistically significant improvements in proprietary measures of manual dexterity (circleTap™ finger tapping test) and in overall physical fitness (fitFactor™), over the course of a 2-year pilot study.

Beneufit's fitFactorTM score is a representation of how closely a person adheres to a workout protocol. The fitFactor score is defined algorithmically according to how closely a peron’s’s actual heart rate and cadence followed the prescribed level.


The main objective of the score is to reward and motivate people for making an effort by quantifying their success. Our scoring algorithm compensate for the objective precision of the sensors by rating compliance based on whether or not a person is within a range of precision to the target metrics. If a person’s actual performance metrics (heart rate and cycling cadence) are within the prescribed zone that is considered full adherence. The algorithm for determing the score is:
fitFactor™ Score = (protocol percentage adherent x protocol difficulty).

The Beneufit circleTap™ finger tapping test allows people to periodically assess manual dexterity and fine motor control on their own through the pdFITTM app(Figure 3). This data is for their personal use and may be shared with their physician or care provider.


To conduct the tap test, a person tracks and taps two targets labelled “1” and “2” in four separate 15-second intervals. A finger tap that successfully contacts the colored circle is considered a hit. A miss is when the finger contacts outside the colored circle. The total number of hits and misses is calculated upon test completion and is displayed along with the aggregate circleTap score of hits minus misses.
Thus, circleTap™ score = total hits - total misses.

Beneufit users’ individual circleTap™ test scores over a two-year period from May 2014 through April 1016. Some users have taken hundreds of these self-administered tests.

The data shows a statistically significant improvement in motor control (as measured by cirlceTap™ scores) over the two-year period.

The alternate finger tapping test is a valid sensitive measure of bradykinesia that correlates with the UPDRS motor score as well as with other validated clinical measures.5 The dynamics of alternate finger tapping, unlike survey based tests, is multifaceted, comprised of digital and axial movement and sensorimotor processing, i.e. speed, accuracy and fatigue.6 There is a short term learning effect after subsequent repeated tests over the course of 24 hours; however, performance from procedural learning the plateau relatively quickly.7

The advantage of the Beneufit circleTap™ Test is the variable length between the tapping targets introduced mid-session of test potentially reducing the learning effect. Thus the Benuefit tap test is designed for hightended sensitivity to provide Parkinson’s disease patients with as much accurate information of their physiological improvement from exercise.

On average, circleTap™ scores increased by 13% from Early to Mid training and 19% from Mid to Late training. Statistical significance denoted as p<0.05. 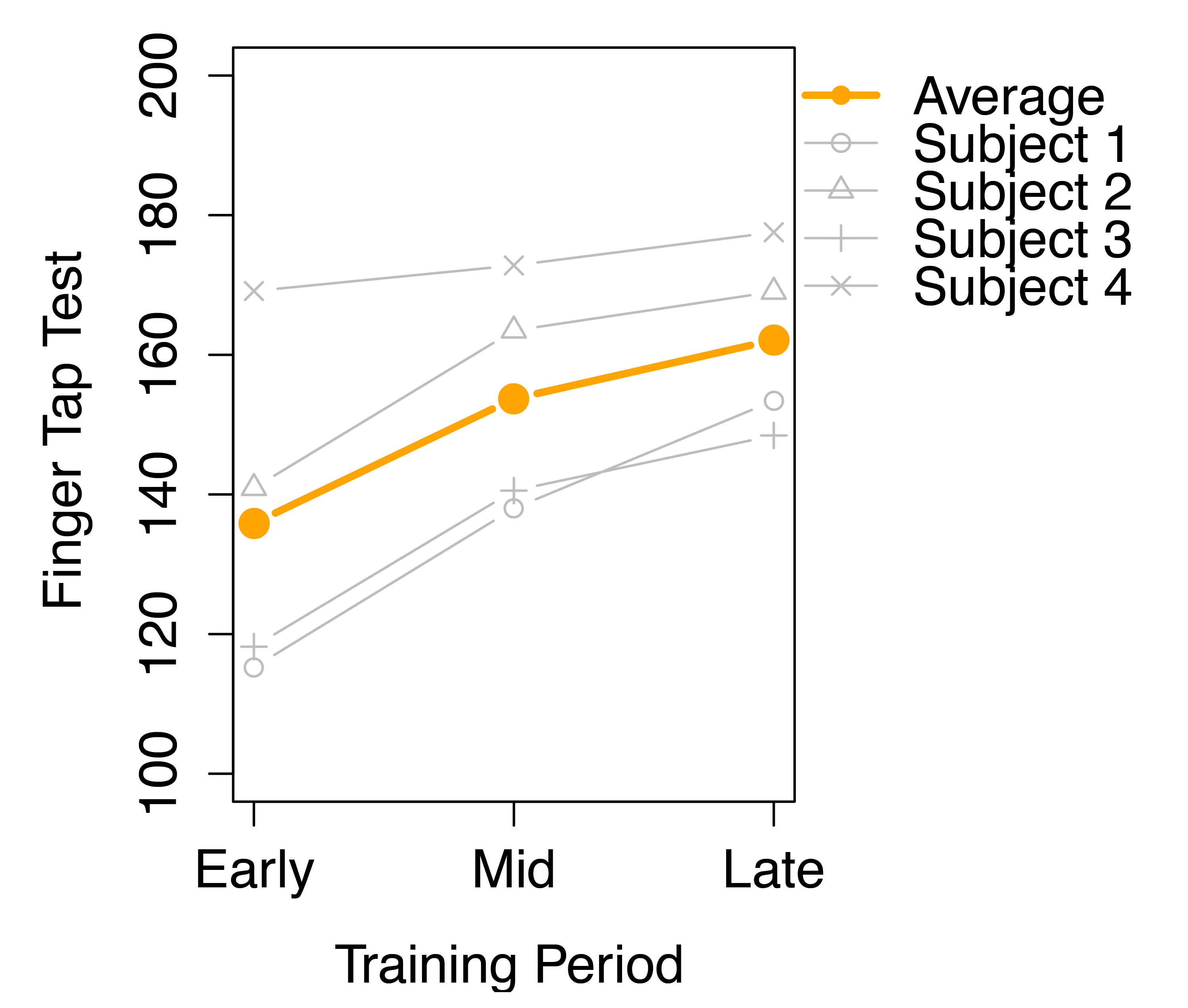 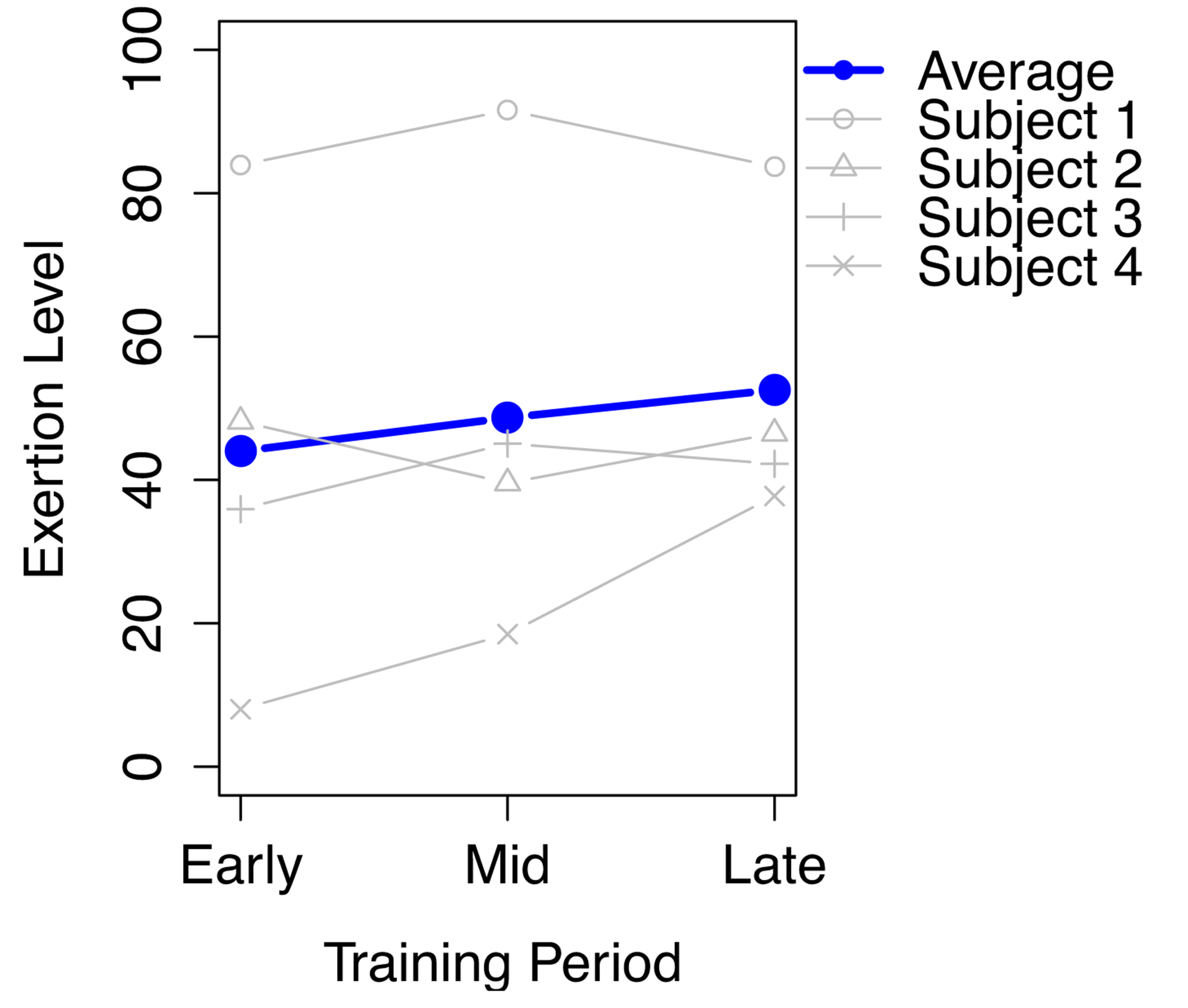 These charts show effect of tap test progress longitudinally between the Parkinson’s disease (PD) group and the control group.

The PD group shows improvement over time and clusters up and to the right while the control group experiences no perceptible improvement.

Significant improvement is shown in tap test results with the affected hand and none for the other hand.

Since this person is right handed the overall score is higher for the right land. 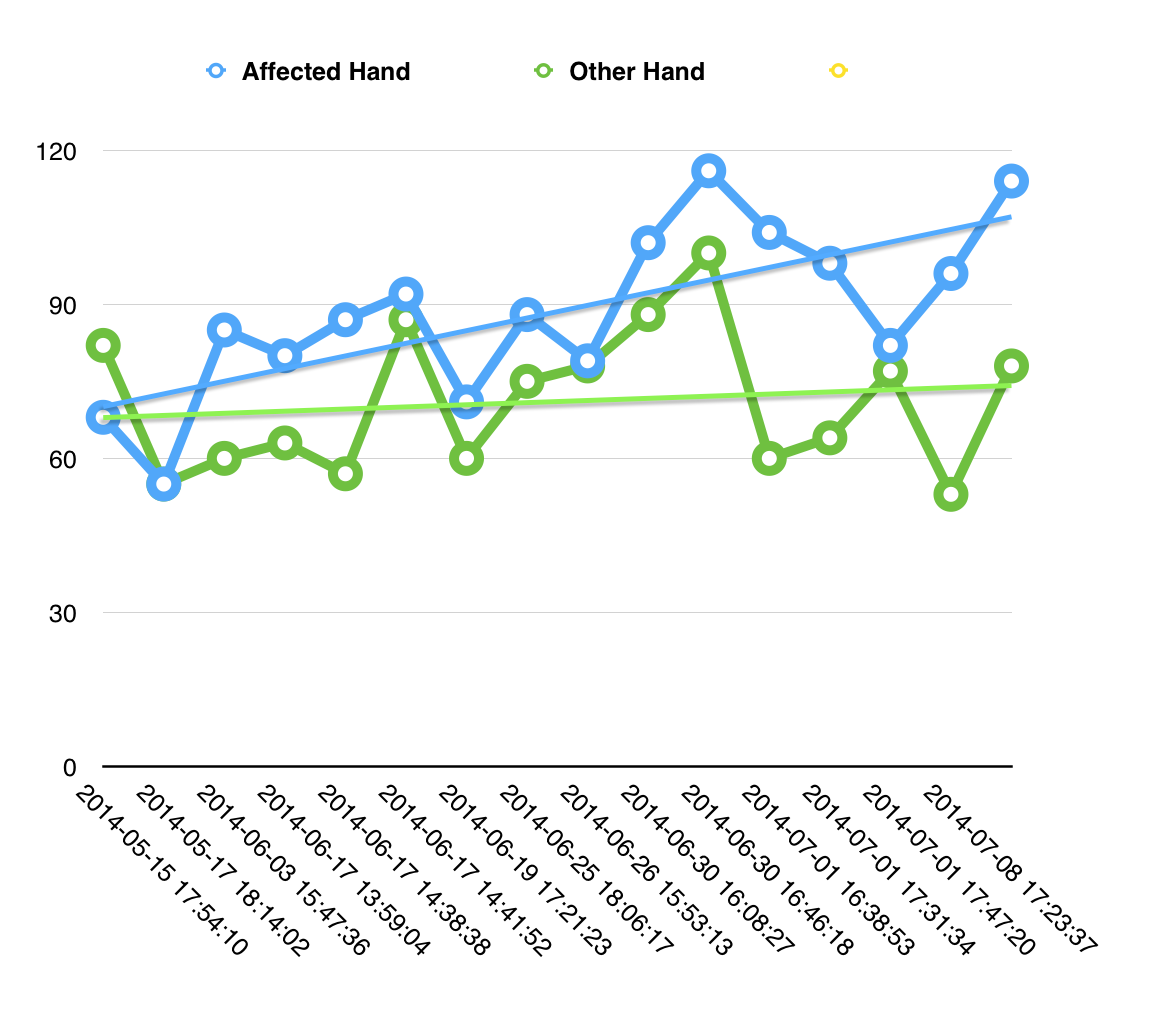